Our Roadshow with Diageo and Heineken Field Services was nothing but MAR-VEL-LOUS!

Our team got to witness the once in a lifetime Collaboration between Superman, Yoda, and the Men in Black.

Our job was to facilitate the interactive aspect of the conferences. In other words we had to get the delegates thinking and talking. We decided that using Capture It, Live Drawing Events, Chatter Box™  and a Corporate Quiz would be the best program to deliver our clients objectives.

We began working on the logistics of the event (lugging 3 pop up easels, 1 wooden easel, 3 A0 foam boards, a wooden stool, AstroTurf, +-200 Quizzes, +-20 Boxes, a tool box, pens, pencils, stickers erasers, markers…around SA) we quickly realised the challenge we were in for. With positive attitudes, giant red bags, and many helping hands, we made it happen.

This venture got us thinking about the importance of being willing and able to get along with others. I have heard the term collaboration so many times, but never did I understand how difficult, yet undeniably vital it actually is.
During Chatter Box™ The delegates also got to experience the importance of collaboration, not only through the teamwork required to come up with original concepts, key points and illustrations but also when building the Chatter towers which demonstrated the desired height could only be reached if they all joined forces, shared strategies and worked in synergy.

Tuesday the 26 January 2016 was a big day for Conceptual Eyes. Three jobs, with three artists in three provinces. All went off without a glitch and we were all so proud of what we had accomplished. 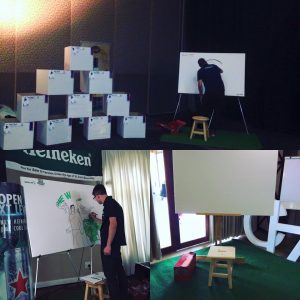 The roadshow involved 3 Illustrators and 3 Facilitators across 3 different provinces. The collaboration between artists was a real highlight for us. All artists were given a basic template but were allowed to illustrate the content however they chose. This allowed the delegates to see how the same message was expressed in a variety of different ways, each artist had their own style, colour preference and favourite pens.

The real driving force behind the success of this event was the helping hands in the background. The colleagues transporting Astro Turf, pop up easels and toolboxes to Durban, sympathetic EPS guys transporting it all back, helpful dads/brothers and neighbours sorting out boards into boxes and other boxes into more boxes. Being in the middle of this intricate network taught me just how impossible it is for any superhero to win if they are on their own. Disney better watch this space, because the Conceptual Eyes Production of THE SUPER STARMEN in which Luke Skywalker joins forces with Will Smith and The Incredibles is going to take the world by storm.